The Chihuahua Husky Mix, is a hybrid mix breed dog created by breeding the Chihuahua and the Siberian Husky. Yes, this sounds crazy to us too! This of course isn’t the most natural thing. For this to even work in the first place the Husky Female must be bred via in-vitro fertilization from a Chihuahua male. We are going to do our best to dive deeper into such an incredibly strange mixed breed. It is always hard to tell what a mixed breed dog will be like, but if you continue reading below we will dive into this hybrid deeper. Sometimes this breed gets confused with the Alaskan Husky Chihuahua mix. Continue reading below to see pictures, videos, and learn more about the beautiful Chihuahua Husky Mix. They can have beautiful markings and no, they are not hypoallergenic. Of course. they can easily have long hair.

While we really recommend that you acquire all animals through a rescue, we understand that some people might go through a breeder to get their Chihuahua Husky Mix puppy. That is, if they have any for sale. Always screen your breeders as much as possible to ensure that you are getting as high a quality dog as is possible. What is the price? You will have to check the breeders to see if they even have any for sale.

Here are some pictures of the Chihuahua Husky Mix 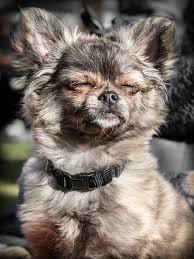 The Chihuahua's history is kind of confusing and there are many theories about where these guys came from. The one cool thing is that there are archaeological finds in Mexico that proves that’s where they originated.

One of the most prevailing theories is that they came from the Techichi. The Techichi was a companion dog who lived with the Toltec civilization in Mexico. This is a very old breed with records starting around the 9th century. It is thought to be even older though with dog pots from Colima, Mexico, depicting them dating back to 300 BC. Even older than that has the Mayans showing evidence of dogs similar to the Chihuahua in materials from the Great Pyramid of Cholula, predating 1530 and in the ruins of Chichen Itza on the Yucatán Peninsula.

There is actually lots of archaeological evidence showing the chihuahua and similar size dogs dating to 100 AD, indirect evidence that the breed was in Mexico over 1400 years before the first Europeans arrived.

So this dog was around for literally thousands of years. In 1520, Hernan Cortés wrote a 1520 letter stating that the Aztecs raised and sold the little dogs as food. The Mayans weren't exactly the most friendly and humane culture, small dogs such as Chihuahuas were also used as living hot-water bottles during illness or injury. This is thought to start the practice of burning the deceased with live dogs, thought to exonerate the deceased human's sins. Some historians believe this practice is where the idea of pain being transferred from animals to humans originated. Colonial records refer to small, nearly hairless dogs at the beginning of the 19th century, one of which claims 16th-century Conquistadores found them plentiful in the region later known as Chihuahua, hence the name. You can expect some of these same traits to show in the Chihuahua Husky Mix.

Trying to predict the personality traits of hybrid dog isn’t always that easy to do. Sometimes the mix takes more from one of the parent breeds than the other. The best thing you can do for any puppy or young dog is to socialize it as well as possible. This can’t be stressed enough as socialization is extremely important.

After watching the videos, these dogs will probably have mid-length hair. However, they probably won’t shed as much as the Husky. Get ready to invest in a good vacuum if you want to keep your floors clean! Give them baths as needed, but not so much that you dry out their skin. Never tie your dog up outside - that is inhumane and not fair to him. The Husky can be a great escape artist so if left in the backyard (temporarily of course,) they will be tough to keep in. You will need to make sure the fence is extremely secure and buried a couple of feet in the ground. Plan on taking them for extremely long walks and hikes to keep their energy level down. A tired dog is a good dog.

I good diet to look into is Raw Food Diet. A raw food diet will be especially good for the Wolf background.