This proud-looking dog is consistently listed among America’s most popular. Although a happy and outgoing dog, he seems able to sense the difference between a friend and a threat, making him both a delightful companion and a reliable watchdog. Physically, two features unique to the Boxer are their broad, blunt muzzle and flat-faced head. They are strong, versatile and intelligent, traits that undoubtedly contribute to their popularity.

The Boxer is of German descent; his nearest ancestors are a now-extinct, Mastiff-type German dog, called the Bullenbeisser, and the bulldog, imported from England to Germany. Bred to hunt large game, including boar, deer and bison, the lightning-fast Bullenbeisser would chase its quarry and hold it until the hunter caught up to secure it. This tenacity can be seen in the Boxer personality to this day.

The Boxer spread through Europe and for a time may have been used as fighting dogs for “betting men;” this “sport” was eventually banned.

Boxers were heroes during both world wars as carriers of messages, ammunition and supplies. It was during this period that the breed’s popularity gradually grew in the United States, as soldiers brought them along when returning home. The first Boxer was registered with the AKC in 1904; he is classified as a working dog.

The male boxer stands about 23 to 25 inches; the female, 21.5 to 23.5. Average weights are 60 pounds for females and 70 pounds for males. Their smooth, shiny coats come in fawn or brindle, with flashes of white. Occasionally an all-white (not albino) dog is born, but because breeders want to eliminate the all-white gene in show dogs, these puppies are usually neutered by the breeder and given away to live their lives as pets.

The Boxer has been described as possibly the best example of an “all-around dog,” meaning they are patient, affectionate and protective around children; affectionate toward the entire family; and wary enough of strangers to make an excellent guard dog. They make a distinctive and persistent sound when they want to alert their owners to something. They also like to sleep cuddled up to the person or people they love most. They have excelled as service dogs, guide dogs for the blind, therapy dogs, and police dogs in K-9 units.

Sadly, the Boxer is prone to a number of health issues prospective owners must be aware of. Some of these issues are the result of overbreeding and can be avoided if the prospective buyer uses a reputable breeder. Local boxer clubs can help you find one. Another sad fact is that about 22% of puppies die before they reach 7 weeks, due to stillbirth and infection, and again probably the result of overbreeding. The good news is that the average Boxer lives for 11 to 14 years.

Potential illnesses in the Boxer include deafness (about 18 to 20 percent of boxers are born deaf in one ear, and boxers with excessive white markings are likelier to be deaf; breeders are trying to limit the size of the white color splashes to reduce the incidence of deafness); cancers; heart ailments; allergies; torsion (bloat); foot problems; canine follicular dysplasia, in which dogs lose their hair due to a genetic defect, brachycephalic syndrome (difficulty breathing because of the shape of the head, nose and throat); ear infections, epilepsy, hip dysplasia, hypothyroidism, “cherry eye”, corneal ulceration and others. In addition, boxers are particularly sensitive to many medications.

Boxers are relatively easy to care for. Regular vet visits are crucial to check your dog for signs that any of the above diseases are developing. Beyond that, their short coat is easy to groom (brushing the dog is a good chore for a child); plus, their year-round shedding is best controlled by a weekly brushing. Bathing can be limited to once every three or four months, as Boxers tend to keep themselves clean in much the same manner a cat does.

When looking for a dog, we ask that you please consider rescuing. Here is a link to one of many boxer rescues: http://adoptaboxerrescue.org/ 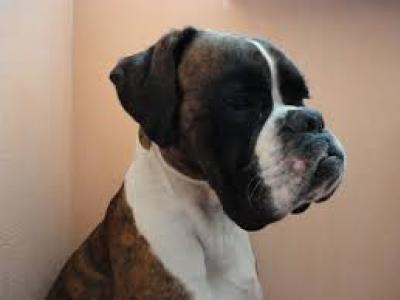